Lake Cahuilla is a body of fresh water that existed in the same region the Salton Sea occupies today in southern California, USA .  The lake was much larger than the Salton Sea and occupied the entire Salton Trough including most of the area known today as the Imperial Valley.  Over several millennia the lake formed and disappeared many times due to evaporation and changing path of its main water source, the Colorado River.

An explorer named William Phipps Blake visited the area in the 1850s as part of an expedition to explore possible routes for the Transcontinental  Railroad for the United States of America.  He was the first person to scientifically assess and describe the region in great detail.  At the time of his exploration the lake was dry, but as part of his study of the area Mr. Blake found evidence that a great lake had once existed in what was then a desert.  He named it Lake Cahuilla, after the local Native American people that inhabited the region.  In his survey, he postulated that waters from the Gulf of California / Sea of Cortez had at some time in the past extended into the area.  This assessment was incorrect as waters from the Gulf / Sea have never encroached into the Salton Trough.  The mistake was made because tectonic plate movement and large scale subsidence were not yet understood. 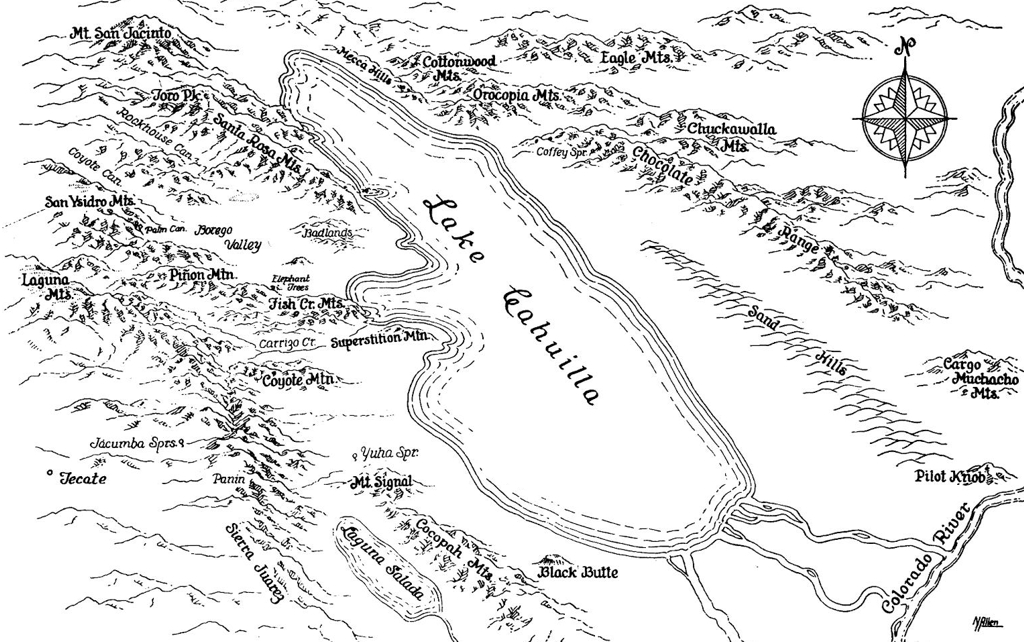 Illustration of Lake Cahuilla and the Surrounding Region

Note; In present day, there is a modern man made reservoir to the west of Vista Santa Rosa, CA, USA named Lake Cahuilla.  The reservoir occupies a very small section of the northern portion of the basin where the ancient Lake Cahuilla existed.