An injunction imposed by court during New Liverpool Salt Co. trial orders that no more water be allowed to flow into the Salton Sea which necessitates that the Holt Power Company cease operation as it derived its power from water wasted into the Alamo River through its turbines.

Predictions of the Salton Seas demise were rampant.  Evaporation, very little rainfall, paltry amount of runoff from canal system all meant that loss of water was greater than water added.

A levee breech causes flooding once again, but it is brief.

The level of the Salton Sea continues to drop from its peak depth of 76 feet to just over 40 feet (appx. 10 meters).

PWR (Public Water Reserve) Executive Order 90 (1924) and 114 (1928) by Calvin Coolidge to reserve the boundaries of the Salton Sea, below 244 and then 220 feet (below sea level) for disposal of waste water from irrigation is what set the foundation for the sustenance of the Salton Sea.  These orders were revoked by Public Land Order 6105, March 5, 1982.

Long a thorn in the side of Imperial Valley farmers were the complications related to the Imperial / Alamo canal being largely in Mexico.  Surveys were done to establish the viability of a canal system to supply the valley completely on US soil.

Heavy rain and runoff from the past several years, in combination with additional runoff from expanding number of farms has raised the level of the Salton Sea several feet.

Expansion of farmland and additional runoff from irrigated areas approached the level needed to not just sustain the Salton Sea, but raise it.

The Salton Sea’s level rose for several years until the Southern Pacific Railroad complained that land that it owned next to the sea was agreed to not be covered.

The US Congress passes the Boulder Canyon Project Act and is signed into law by President Calvin Coolidge, paving the way for construction of the All American Canal.

Efforts to improve sections of the Salton Sea shore are made with mention of winter resorts.

Worries about the Salton Sea center on its rising (rather than falling) level because of the new All American Canal bringing more water to more farms, with the resulting additional runoff and seepage.

North Shore Beach was one of several planned developments created near the Salton Sea in the late 1950s.  It was envisioned as a recreational resort community on the northeast shore of the  Salton Sea.

The developers invested large amounts of money in infrastructure such as roads, power, fresh water supply, and even an airstrip that supported amphibious planes.  Potential buyers and investors were tantalized by the prospect of cheap property they felt was destined to increase in value very quickly.  A yacht club, boat marina, and hotel were also constructed as part of the project to further entice people to the region. 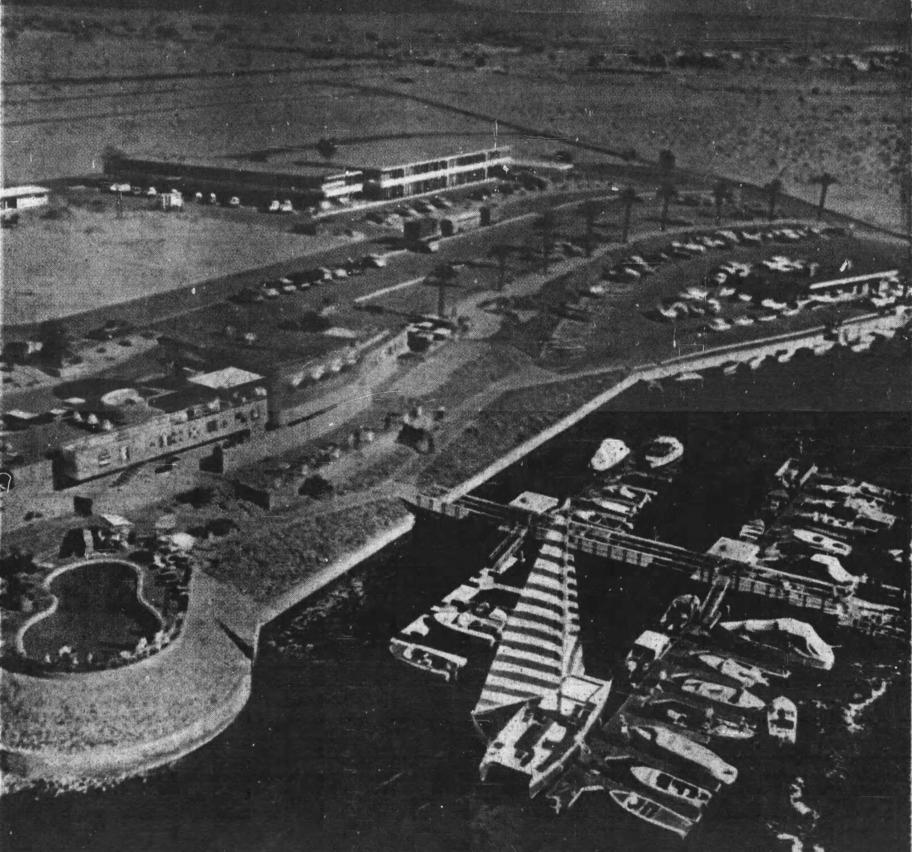 Note; The aerial image was taken mid-afternoon looking east from a plane taking off from the landing strip north east of the yacht club and marina.

Hurricane Kathleen raises the Salton Sea, along with a couple of other hurricanes in the 1970s.

Depth of the Salton Sea is just over 52 feet.