The Salton Sea is an inland body of salt water located in southern California, USA close to the US / Mexican border, with a surface more than 200 feet below sea level.  The creation of the sea was accidental and its continued existence has been dependent on runoff water from agricultural irrigation.  The earliest reference to the “Salton Sea” seems to be from the summer of 1891 when floods from the Colorado River flowed into the Salton Sink for several months creating a much smaller version of the sea as it exists today. 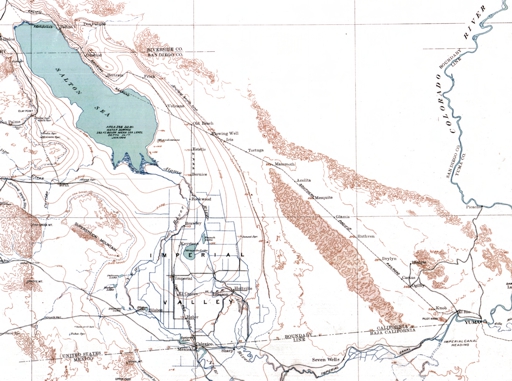 The Salton Sea and the regions surrounding it have been know by many names over the years and include Native American named locations like Lake Cahuilla, Cahuilla Valley, Cahuilla Basin as well as more modern references such as , The Colorado Desert, Salton Marsh, The Salton Trough, The Salton Basin, The Salton Sink, Coachella Valley, and The Imperial Valley.