Source(s); San Diego State University and The Salton Sea - A Study of the Geography, the Geology, The Floristics, and the Ecology of a Desert Basin by Daniel Trembly MacDougal and Collaborators - 1914 p. iii and Report of a Geological Reconnaissance in California by William Phipps Blake made during an expedition lead by Lieutenant Robert Stockton Williamson p. 228, The Salton Sea - Geology, History, Potential Problems, Politics, and Possible Futures of an Unnatural Desert Salt Lake by Larry C. Oglesby - 2005 p. 9-11

Image(s); Drawn by Lawrence Norton Allen, originally published in Desert Magazine.  Republished in 1963 and 1991 in the book Lost Gold and Silver Mines of the Southwest by Eugene Conrotto p. 12

Image Alternative (ALT) Text: LifeOfTheSaltonSea.ORG - An illustration of Lake Cahuilla, the predecessor of the Salton Sea, and the surrounding region. It was drawn by Lawrence Norton Allen for Desert Magazine.

Image Extended / Long Description (LONGDESC) Text: This map depicts Lake Cahuilla as it existed many times in the distant past in the same region where the Salton Sea exists today. The lake is much larger, at its capcity, occupying the entire Salton Trough. It is roughly 5 times the surface area, 4 times the depth, and about 100 times the volume than the sea.

Water from the Colorado River to the south is shown flowing west, northwest, into the Salton Sink and Lake Cahuilla, then flowing out of the into the Gulf of California / Sea of Cortez to the south, southwest. The Laguna Salada, another region to the southwest of the lake, also below sea level, filled with water too. Its source of water is not shown on the map, but is from a tributary of the outflow of the lake as it makes its way to the gulf.

The map includes surrounding mountain ranges, including Pilot Knob, that demonstrate how the lake is surrounded on the west, north, and east by much higher elevations. The names of the mountains is in a text similar to caligraphy.

There is also compass rose on the top right of the map showing north. The author's image signature, in its initial form of NAllen, is on the bottom right in his typical style, which is remenicent of a Metropolis (movie) style.

The map was drawn by artist Lawrence Norton Allen and originally published widely in the November 1960 issue of Desert Magazine. Norton Lawrence Allen was born January 6, 1909 and died May 24, 1997. He published many sketches during the early 20th century with many published in Desert Magazine starting in 1937. A full Biography can be found here: https://www.jstor.org/stable/27920216?read-now=1&refreqid=excelsior%3A31eeabba87f28dbd515d407e41a4a419&seq=39#page_scan_tab_contents An interesting investigation on his life can be found here: https://www.kcet.org/shows/artbound/norton-allen-tracking-the-elusive-mapmaker. The Disney movie Cars uses a map of Radiator Springs and the surrounding area at the beginning of the end credits that is derived or sourced or drawn in or reminiscent of his style.

Note; In present day, there is a modern man made pond to the west of Vista Santa Rosa, CA, USA named Lake Cahuilla.  The pond occupies a very small section of the northern portion of the basin where ancient Lake Cahuilla existed.

Additional information from: Lost Gold and Silver Mines of the Southwest by Eugene L. Conrotto 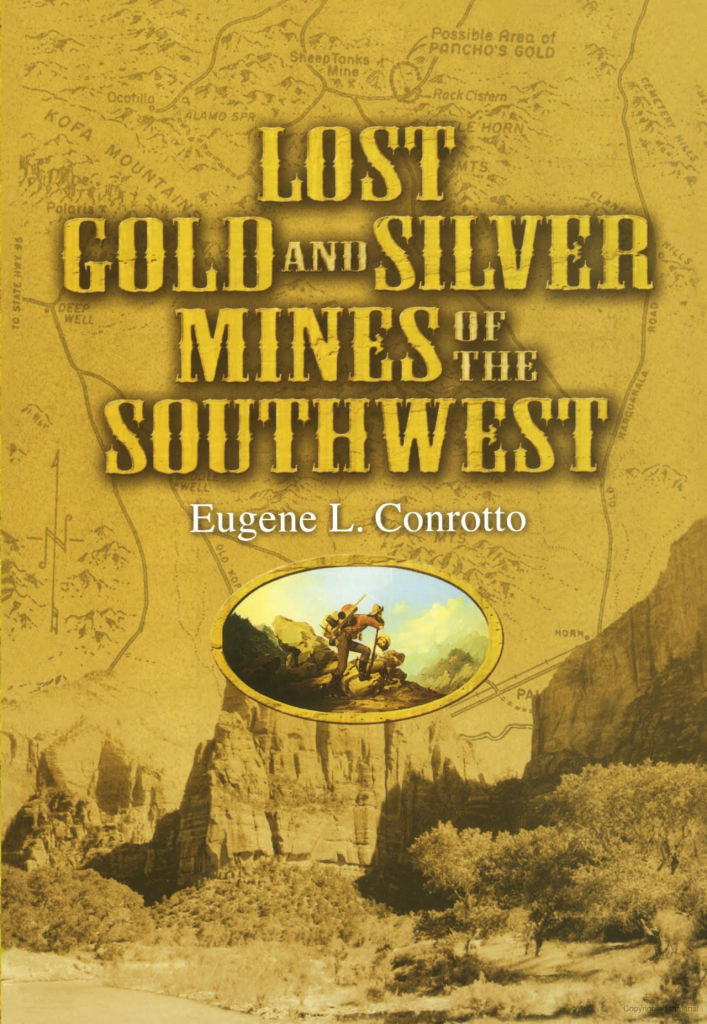 It is worth noting that almost one third of this book is devoted to bibliographical references which indicates an extensive depth of research.