Various sources from the early 1900s differ slightly in their accounting of certain measurable distances and locations.  Some can be categorized as simple mistakes with others deviating so far from reality there’s no way to account for the errors.

The topics include the following subjects;

While the preponderance of evidence and most sources indicate 4 miles, the definitive truth is clearly evident thanks to Google Earth. 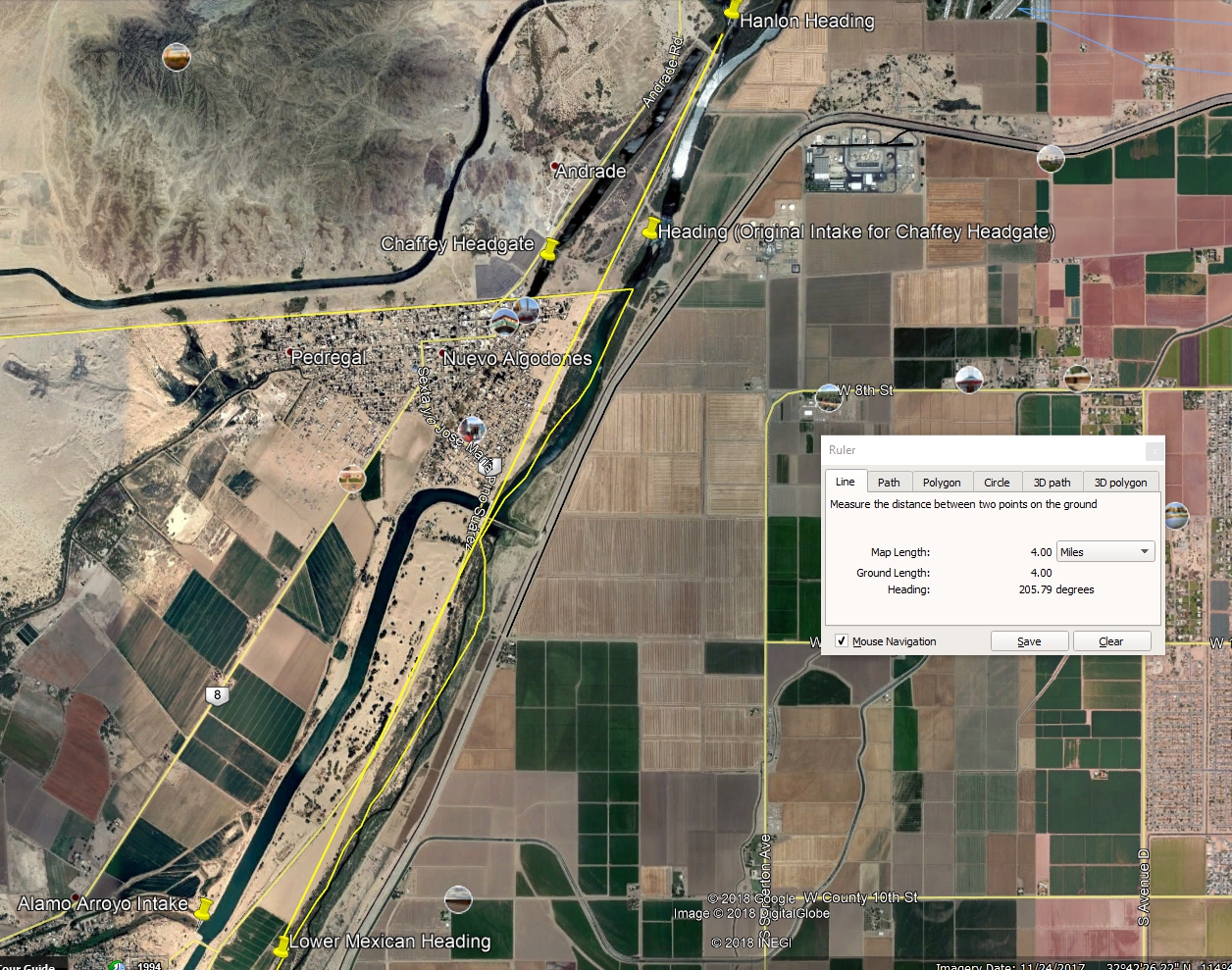 The Imperial Valley and the Salton Sink by Harry Thomas Cory with Introductory Monograph by William Phipps Blake – 1915 fig. 13 p. 1265 has a map showing the ‘Original Intake 1901’ (heading) and ‘2nd Intake 1902’ (heading) incorrectly placed or labeled, IE they’re reversed.  Every other source and map depict the correct locations

The original intake (heading) for the Chaffey Headgate was built in 1901 and was about 1 mile south (several sources state 1.25 miles) of the second intake for the Hanlon Headgate built in 1906.  The Hanlon Headgate (it still exists today) itself is about 500 ft. north of the Chaffey Headgate location.   The map in ‘The Imperial Valley and the Salton Sink’ depict the ‘2nd Intake 1902’ (heading) downstream from the headgate it was intended to service.  That simply won’t work as water does not flow up hill.  There’s even another map in the same book on p. 1303 that seems to contradict the map on p. 1265.

This map shows incorrect intake locations or has them mislabeled. 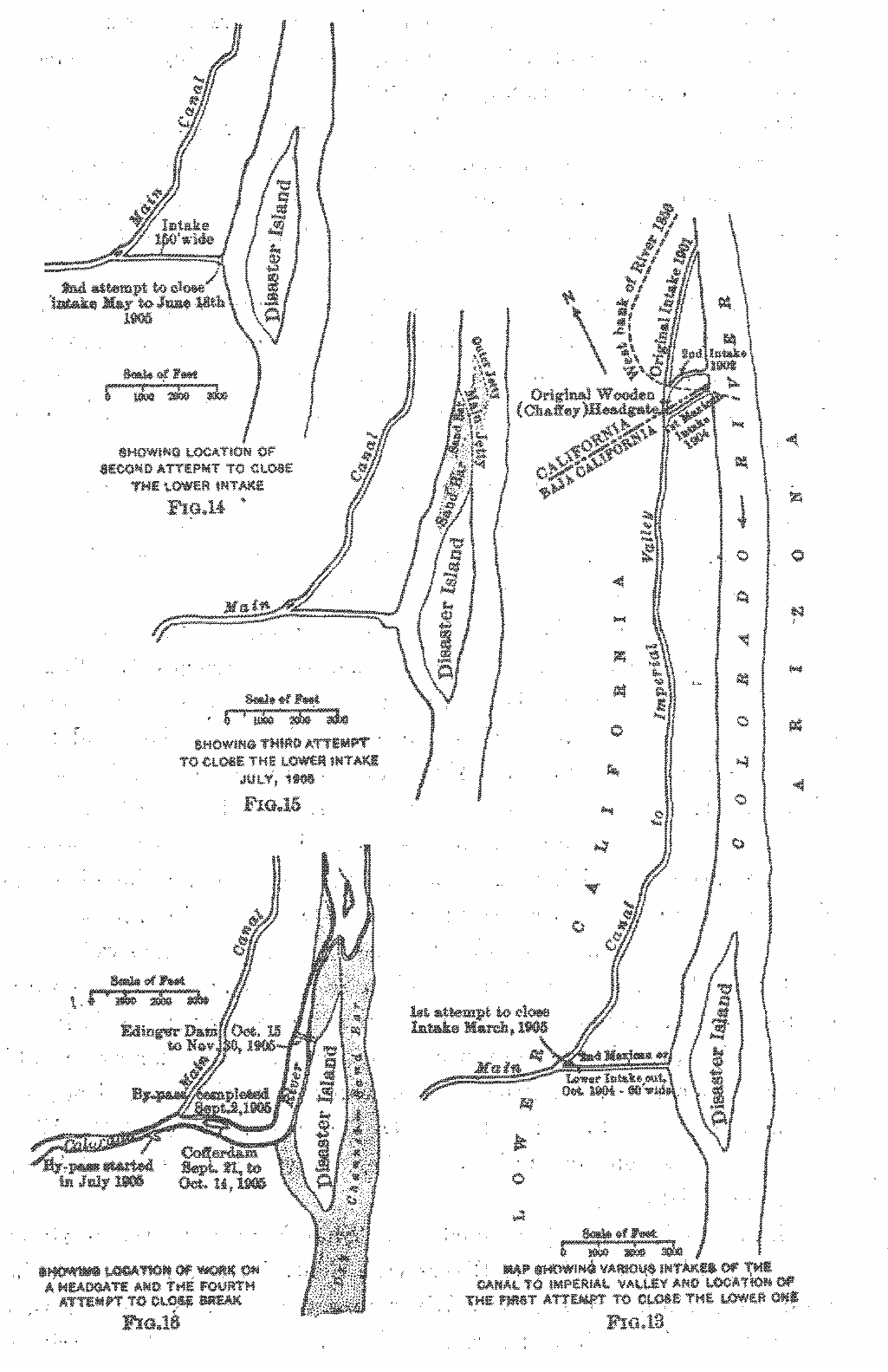 This map shows the correct locations of the intakes (headings) from Irrigation in Imperial Valley California Its Problems and Possibilities by C. E. Tait – 1908 p. 45 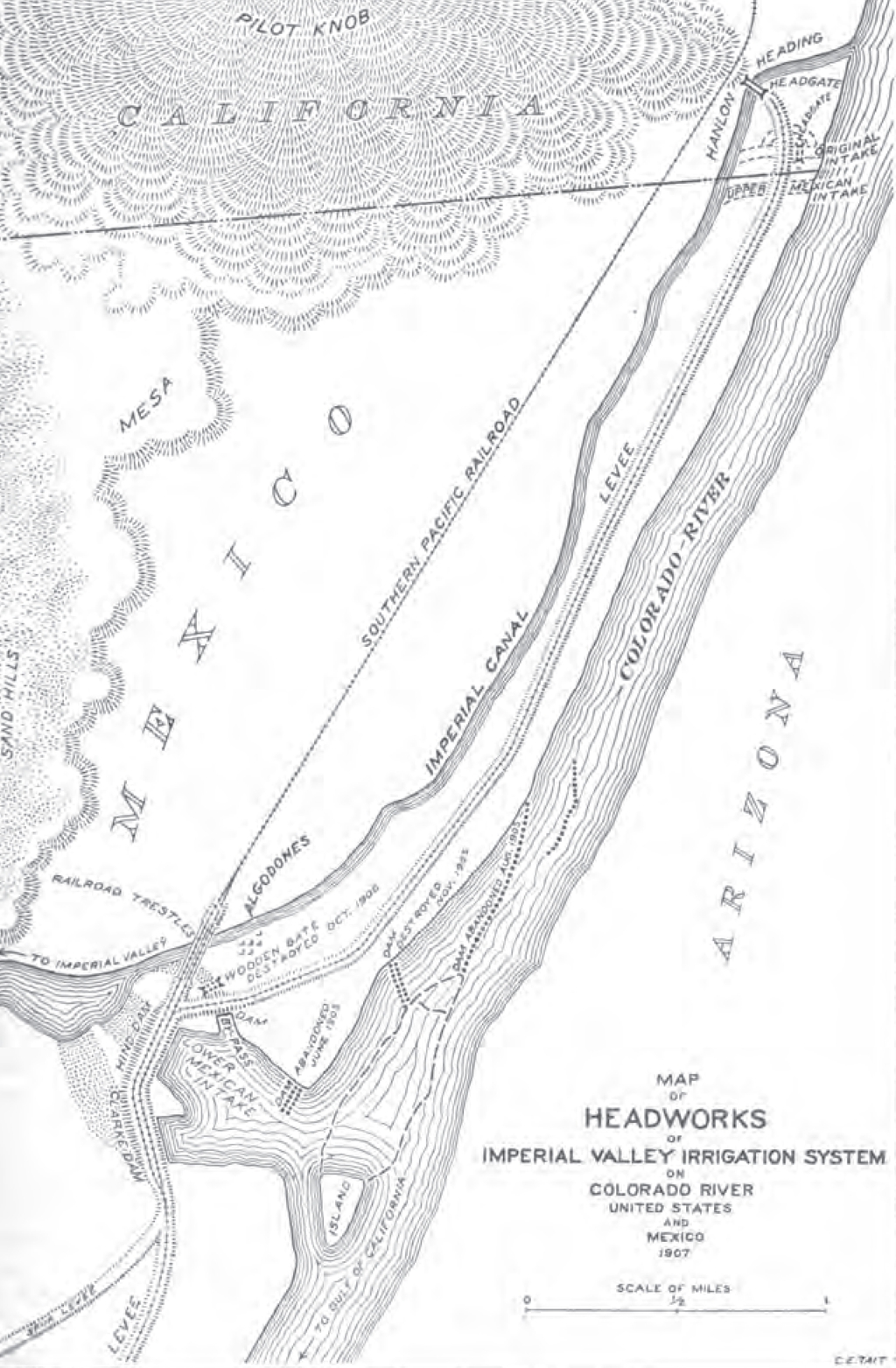 Locations and distances for the headings (intakes)

Irrigation in Imperial Valley California Its Problems and Possibilities p. 12 has information so horrifically inaccurate there is no possible way to explain it.

Two plans for diverting water from the Colorado River were considered.  One was to make the intake of the canal at a point known as Potholes (now Laguna), 14 miles above Yuma and 22 miles above the international border. 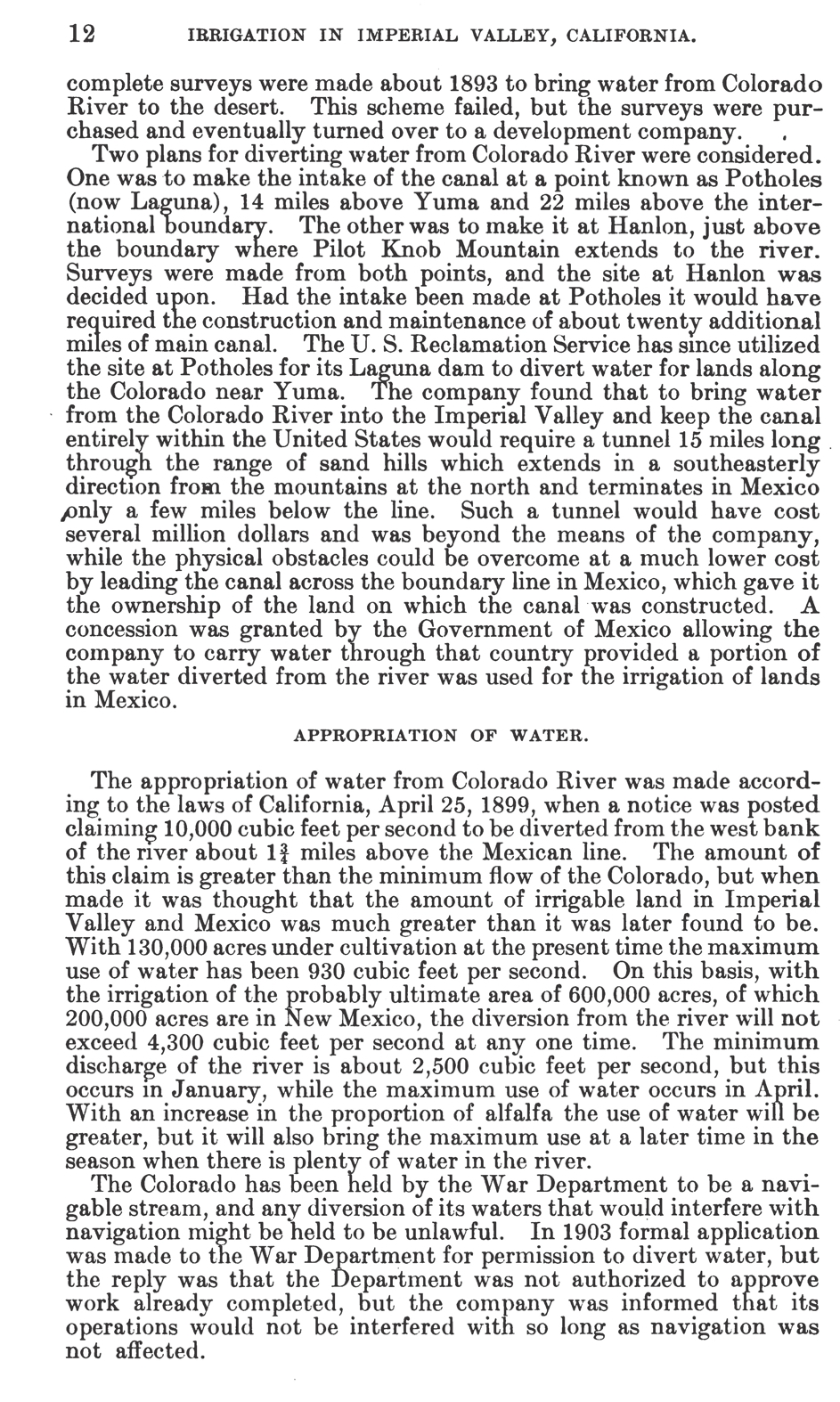 Here are the issues;

The Salton Sea – An Accounting of Harriman’s Fight with the Colorado River; p. 24 has the date as May 1901, a little more than a year after Mr. Chaffey joined (the date Mr. Chaffey joined is agreed upon by all sources to be Mar or Apr 1900)

Charles Rockwood him self in his statement refers to;

From Irrigation in Imperial Valley California Its Problems and Possibilities; p. 13

The Alamo channel was utilized as the canal from this point for a distance of 40 miles to a point about 1 mile south of the boundary known as Sharp’s Heading.  At Sharp’s Heading the Alamo waste gate was constructed to allow any water reaching this point not needed (for irrigation) to pass (bypass irrigation channels) down the river to Salton Sea.

…almost seems like an error, where Sharp’s Heading seems to be both at the border and 1 mile south of it.  Probably just poor wording as it appears most books published from that era did not have the luxury of an editor.